…
That’s one way to understand Apple’s empty message about privacy. Tim Cook talks a big game, but at the end of the day, his company is allowing the surveillance-capitalism atrocities it claims to oppose. It sometimes helps people find alternatives in its own services, but far more often, it fails to prevent its customers from being harmed by companies such as Google and Facebook—in part because it provides, endorses, and profits from their use.

No matter what it says, Apple is not a company committed to data privacy. It is a company that adopts considerably better policies than its more data-hungry competitors, but that does little to curtail the general problem. Meanwhile, Apple reaps huge profits selling the glass rectangles on which the more invasive apps run. On its own, Apple couldn’t end the data economy, which long predates smartphones. But if Apple really wanted to, it could offer a much more serious substitute, one that could bring about a whole different world of technological experience. The fact that the company claims to value that alternative while doing so little to bring it about is less righteous than just doing nothing.

Yes… apple’s facebook, apple’s maps, apple’s linkedin; and then what they would question would be the «walled garden».

If Apple’s customers want to use Facebook and Google’s apps, they are allowed. The ones who don’t want (to use them) can skip them… what’s the problem?

Last, but not least, Apple just claimed about its developers’ program terms of use… which is about what it can claim.

In fact, failing to take action while grandstanding about the urgency of doing so might make it even worse.

In fact, take action is exactly what Apple did; at their level, developers T & C.

I don’t think they shouldn’t act further in name of their users, who should learn what they do and allow into their devices. 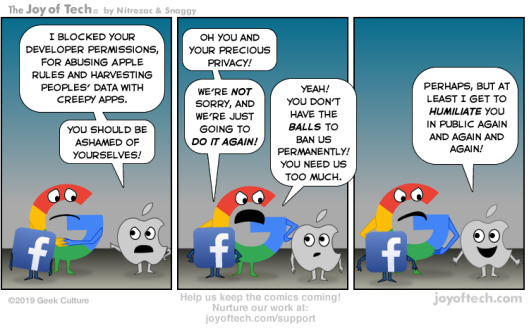