https://www.wired.com/2017/05/apple-park-new-silicon-valley-campus/
The value, he argues, is not what went into the building. It’s what will come out. 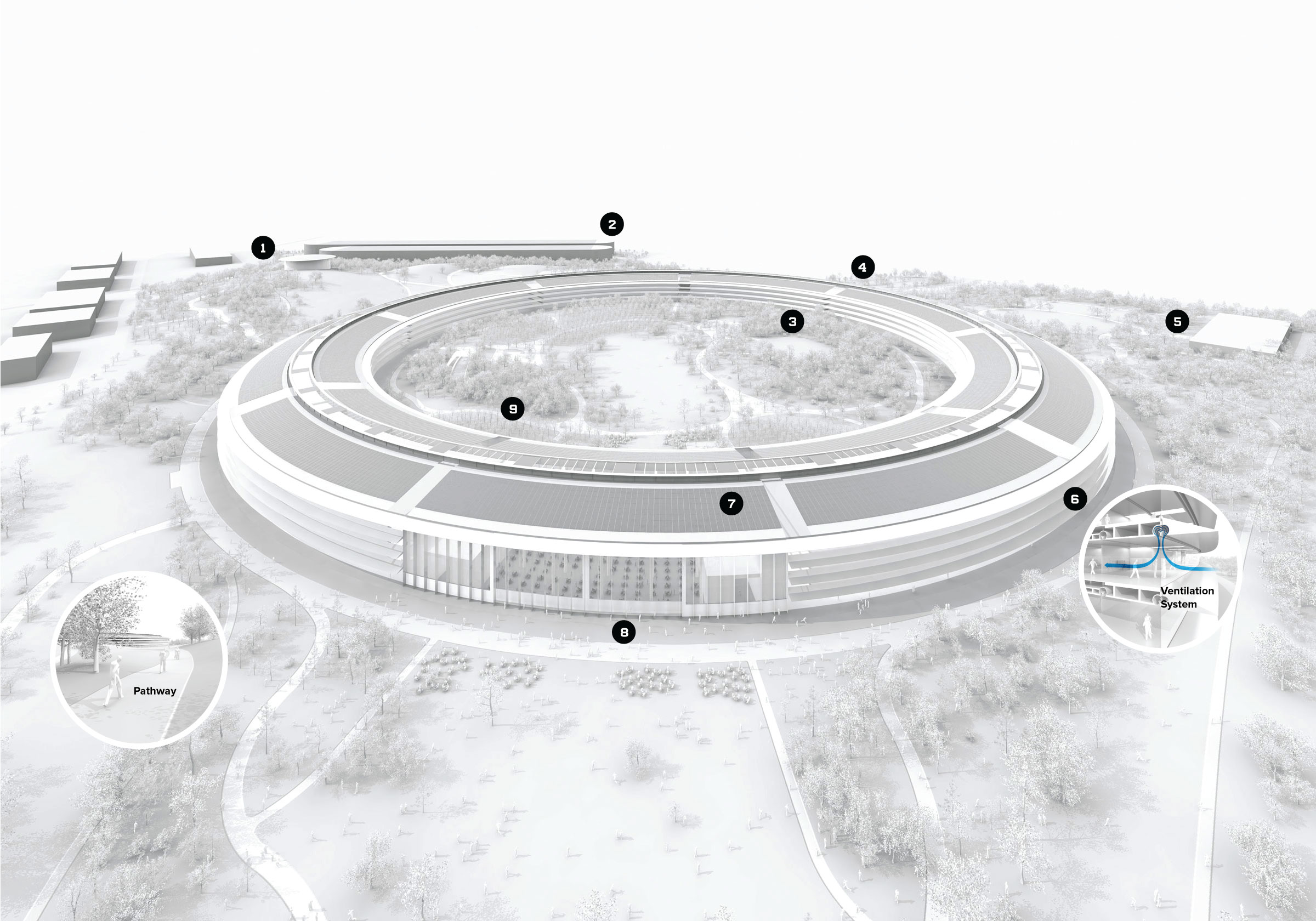 1. Hilltop Theater: A 1,000-seat Steve Jobs Theater features a 20-foot tall, 165-foot-diameter glass cylinder topped with a metallic carbon-fiber roof. “It’s on a hill, at one of the highest points on this land,” Tim Cook says. “It felt like him.”

2. Parking Space: In 2012, Apple executives worried the project might exceed its budget. “It was a bit of a runaway kind of thing,” Cook says, leading to what one of the architects describes as a budgetary “diet.” One concession: Instead of 6,000 underground parking spaces and 3,000 above­ground (the former being more expensive), the ratio was flipped.
3. Shock Absorbers: To withstand earthquakes, the Ring is mounted on huge steel base isolators that ensure the building can move up to 4.5 feet in any direction without losing its vital services. “I love that the ambition was about more than just surviving,” Ive says. “The building could still function.”
4. Tiled Tunnel: A 755-foot, white-tile tunnel connects Wolfe Road to the campus and the Ring’s underground parking. Apple prototyped a corner of the tunnel before Ive’s design team signed off on its shape and tile work.
5. Wellness Facility: In addition to weights and a two-story yoga room, the 100,000-square-foot Fitness & Wellness Center offers employees access to medical and dental services. “I’m a big believer in people staying active. It’s something that makes them feel better and more energetic,” Tim Cook says. “It’s all about the fixation on the customer, and the customers here are our people, our employees.”
6. Breathing Building: To fulfill Jobs’ wish for a building that breathes, the engineering team consulted with experts who optimize airflow in Formula One race cars. The Ring inhales air through soffits (the undersides of the canopies) along its perimeter. Elsewhere, shafts that act like chimneys exhale warm air back outside.
7. Solar System: The 2.8-million-square-foot Ring will run solely on sustainable energy, most of it from the 805,000 square feet of solar arrays on the campus.
8. Giant Doors: The sliding glass doors along the exterior of the café extend the full four stories of the building. Weighing 440,000 pounds each, they open and close quietly via mechanisms hidden underground.

9. Native Landscape: Jobs did his best thinking during long walks in nature, and he envisioned a tree-filled campus where Apple workers could find inspiration in what one architect calls Jobs’ “idealized California.” Apple will plant almost 9,000 trees, all of them drought-­tolerant so that they can survive a climate crisis.