«It’s good to know all the relevant data on a patient – their meds, their allergies, their problem lists, lab results, radiology reports. On the flipside [for clinicians], it’s just more data in my face…, it’s just more data I need to sift through,» said Mike Restuccia, CIO at Penn Medicine, the medical school at the University of Pennsylvania. (Penn Medicine is one of the 12 original beta testers of the Apple application.)

«I think that’s going to be one of the next challenges for Apple,» he said. «Now that this raw data is available, how do you translate it into something that’s more user friendly, more intuitive for a clinician? It doesn’t include physician notes at this point, which is probably a good thing.»

When a user’s iPhone is locked with a passcode, Touch ID or Face ID, the health data in the Health app is encrypted on-device. If a user chooses to sync their health data with iCloud, it is encrypted while in transit and at rest, according to Apple.

In January, Penn Medicine, a healthcare system with more than 1,500 beds, began testing the Health app. Several of the healthcare system’s staff agreed to share their own de-identified EMR data with Apple to ensure it could be properly transferred onto the Health Record app and then displayed on an iPhone. 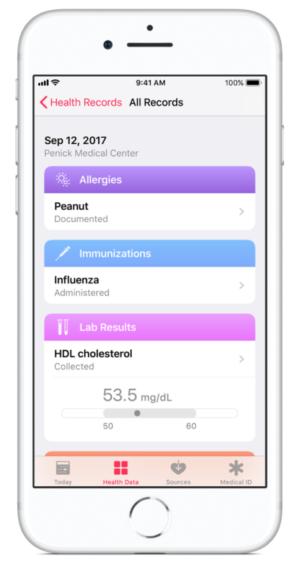 The Health Record app has now been generally available to patients of Penn Medicine, but it’s still too early to say how they’re adopting it or whether they like it, Restuccia said.

«On the ResearchKit side, we have our EpiWatch application, which involves the [Apple] Watch and tracking seizure disorders patients have,» Greene said. «So, because of the amount of data we have access to, we can be in a much stronger position with patients who enroll in that research study.»

At this point, however, the data that Apple Health Record lets patients view from multiple healthcare systems is not available to clinicians; they must ask the patient to share it. «We’re not able to pull that data in,» Greene said. «We have to ask them deliberately if they want to share that with us.»